A friend of mine posed a very serious question to me the other day.

“What’s your high score in Flappy Bird?” she asked me very seriously.

And I seriously replied, “Flappy Bird?”

Seriously though, I’ve never heard of that game before. But ever since yesterday, it has been the talk of the town– err, our class. Everybody loves it, everybody’s playing it. It’s like the new Temple Run of our school. No, actually, not just our school. Even other schools.

Wait, come to think of it, I have heard of it before. Last Sunday, to be exact. A cousin of mine was in our house for a visit, and while she was browsing the net on her phone, she came across a picture on Facebook.

She asked me, “What’s Flappy Bird?”

I was busy surfing the net as well, so I merely replied, “I dunno, why?”

“Well, someone here says he played Flappy Bird until his screen cracked.” She showed me a picture of an iPhone with a terribly cracked screen.

“Probably an exaggeration.” I shrugged.

But anyway, I didn’t bother checking out what the heck that Flappy Bird thing was. Until today.

And now, I have to pose you guys a question as well. What makes Flappy Bird so addictive?

This morning, my classmates were talking about the game when I arrived in the classroom. One of the boys said that he couldn’t bring himself to exit the game. Another classmate replied that it’s because the game is addictive.

I actually tried it out too, and I ended up downloading it on my phone. Bummer. I played it a few times and got a measly score of 10. Hahaha. But then, I kinda realized why this game was so addictive. I wanted to beat my own high score, over and over again.

Since Flappy Bird has no real end, people are just gonna keep on playing and playing it. There’s no “high score” because you can always beat it, right? So you will keep on trying, and trying, and trying, until an hour has passed and you’re not contented with your score of 80 points yet.

Is that addictive? Well, yeah. You can get addicted to the feeling of besting yourself, again and again.

There’s nothing to be gained in this game. Nothing. Hahaha. When the Temple Run craze hit our country, everybody loved it as well. But at least, there were power-ups and written goals in that game. Here, the only “reward” you can have is a virtual medal. There’s no goal at all, since the game is endless.

I think it’ll be nice to have this game when you’re waiting in a line or something, because time flies when you’re having fun, right? But the worst thing about it is, you can play it to procrastinate, and you won’t even notice it since you’re too busy trying to beat your own high score.

I couldn’t bring myself to exit the game too, so instead, I set a timer on 10 minutes. When the timer rang, I had only gotten 9 points. 9! Almost 10! I could beat my high score, right?! Almost!

But, meh. I’m gonna try it out again some other time. Some other time. 🙂 But not now, not when it gives me a reason to procrastinate. And if you haven’t tried it out yet, you won’t know how hard it is to exit Flappy Bird once you’ve started playing it.

Wanna see for yourself how addictive this game is? Download it here for free from Google Play Store or Apple iTunes. I’m warning you though, don’t check it out if you have something important to do. But if you have free time on your hands, then there’s one thing I want to say to you. Enjoy the madness.

Note: Flappy Bird was discontinued many years ago. 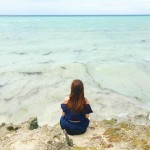